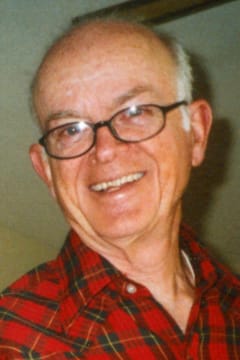 Charles Christopher Michael Gerhards was born November 22, 1930, to Matthias Christopher and Margaret Fritschen Gerhards in Loring, Kansas. He was third in line of eight children. During the depression his family moved from the potato farm in Loring to Portland, Oregon. Charles worked with his father as a carpenter during school years, graduated from Portland University with an engineering degree. He worked for General Electric in Idaho Falls, Idaho working on the nuclear airplane project proposed by then President Dwight D. Eisenhower. It was during this time that he met Joan Marie Ann Miller, a teacher and his future wife of sixty-four years. With the cessation of his job due to nuclear program cutbacks, the opportunity came to work with Forest Products Laboratory in Madison, Wisconsin. He spent his remaining career in wood research developing testing of wood load duration. Some of his research papers have been used worldwide. He was awarded the first and third ‘Markquart’ Awards for his research.

At age fifty-five, he took advantage of an ‘early out’ to retire. As the years of retirement progressed, he found enjoyment and creativity in wood working projects, hiking with his friend John Zerbe, golfing with son Rich, exploring the world through avid reading, family camping trips, and genealogy research. He enjoyed biking and jogging winning a trophy for his age group, running a full marathon. Always there were gardens that produced an abundance of fruits and vegetables. There were several years he volunteered at Donald Park near Mt. Vernon. His care for mother earth was fulfilling as he envisioned the park being preserved and used by others for various activities.

Charles’ body will be cremated, and his remains will eventually be buried with his wife Joan.
To view and sign this guestbook, please visit: www.ryanfuneralservice.com