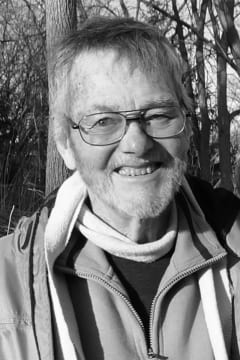 Madison- ​​​​​David Robert Cheney was born in Eau Claire, WI, on April 2, 1927, the son of Eugene and Esther (Robare) Cheney, and the youngest of 3 brothers.
He spent his youth fishing and hunting with his family, collecting stamps, and roaming the woods and fields with his beloved dog. After serving in the Navy, he received his Engineering degree from UW-Madison, and married Nan Tilseth of Menomonie. They made Madison their permanent home, and he continued roaming the woods and fields as the 45th certified Land Surveyor in the State of Wisconsin for the next 60 years. As activists for peace, justice, and equality, he and Nan were an unstoppable pair. Together, they worked to make the world a better place.

David and Nan raised 4 children on the edge of Madison in a Prairie-style house he helped build with lumber reclaimed from a bridge project David designed early in his career. They loved working on the house and grounds, and created a restored native prairie on the 3-acre lot--the first of its kind in the city limits. In 1968, they purchased an abandoned stone house in southwestern Dane County as a fixer-upper project and weekend getaway. Through the years, David claimed the purchase as "One of the best decisions I ever made." It remains in the family to this day.

Family road trips were a way of life. There were countless adventures spent in various camping vehicles to ski, camp, and paddle, hike segments of the Appalachian trail, and explore distant roadside attractions and parks in nearly all 50 U.S. states and Mexico. In 1967, they traveled to Washington D.C. to participate in an anti-war protest. When the kids were grown and living their own adventures, David and Nan traveled abroad with friends, enjoying many sights and cultures, including their beloved destination of Kailuum on the Yucatán Peninsula in Mexico.

After Nan died in 2010, David, then in his mid-eighties, found companionship with an old friend turned new love, Luella Allen. They spent nearly a decade together in happiness and contentment until her death in 2020. He frequently marveled at how very lucky he was to have these two remarkable women in his life.

He is survived by his 4 children: Aleck, Nina, Rebecca, and Charlie, 7 grandchildren, and 4 great-grandchildren.

Typically of cheerful demeanor, David's life was well-spent, and his memory will be treasured by his family, friends, and all who knew him. No service is planned. To honor him, please plant a tree, build an owl house, or donate to The Nature Conservancy @ nature.org.