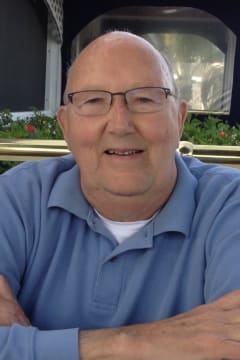 Madison - Gerald Roger “Jerry” Bass passed away on Saturday, July 23, 2022, at his home in Madison, Wisconsin. Jerry was born on March 30, 1934, to Roger and Alva Bass. Jerry was one of 7 siblings. He loved growing up in Madison and being a part of his big family.

He attended Dudgeon School, Madison West High School, and then The University of Wisconsin - Madison (Electrical Engineering). He met his future wife, Kathleen “Kay" Alldredge, at church camp and that was a blessing that would last a lifetime. They were married September 30, 1961. After getting married they moved to Bethlehem, Pennsylvania for Jerry to work for Bethlehem Steel where they also loved still being part of the Moravian Church. Jerry and Kay had their 2 children, Julie and Tom while in Bethlehem. Soon after the birth of Tom, they moved to Park Forest, Illinois in 1964, where Jerry worked for Inland Steel Container and its acquiring company, Van Leer Container, until his retirement in 1996. Jerry and wife Kay moved to their lake home in Fennville, Michigan upon retirement and then in 2000 moved to Verona, Wisconsin. In recent years they split time between Oakwood Retirement Village in Madison and Iona Ranch in Fort Meyers, Florida. Jerry will be remembered for so many wonderful interests, qualities, and achievements by his family and friends, but the designing and building of their second home in Fennville, Michigan will likely stand out. At just 42 years old he used all his weekends and vacation time to create and personally build the home that would bring his family and friends together in a way that created magic. Working with the gifts he appreciated from his parents (his mind, his hands, and his industriousness) he impacted the lives of countless people. Other than pouring the cement for the foundation, doing the masonry for the fireplace, and placing the steel I-beam for the first floor, Jerry did everything to complete the house - amazing. Jerry loved music, especially classical music, and he would surround himself with it at every opportunity. Whether jogging around the running track, sitting along the shores of Sanibel Island in Florida, driving in the car, sitting in a church pew, sitting in a concert hall, traveling the world, anywhere and anytime…there was always music bringing him such joy. Jerry had many interests and pursuits. He enjoyed cooking and eating foods of all types, liked a good beer and wine, raced Albacore sailboats on Lake Michigan, played racquetball, waterskied, sledded, skated, drew beautiful pictures, woodworked, knitted, played Sudoku, enjoyed playing cards, hiking in the mountains of Wyoming, and probably more than anything else - read for pleasure and learning. Of course, Jerry was also a lifelong fan of the UW sports teams and the Green Bay Packers. Jerry traveled throughout Europe and North America with many different groups and methods, but certainly with wife Kay. Since he traveled so much for work, traveling for pleasure was a piece of cake and very reassuring to his companions. Jerry had a very strong Christian faith and was deeply influenced not only by the churches’ teachings and music, but by the leaders of those congregations. Jerry considered going into the seminary himself, but after being advised by “one of the giants of his life” to finish engineering school first, he did just that. Jerry was a natural engineer who was always looking for practical solutions. His ability to make “adjustments” was probably the quality that gave him the greatest ability to live his happy and long life. When his body just wouldn’t allow for anymore adjustments, he was the brave and faithful one who was ready to embrace his next adventure in heaven.

A funeral service will be held 2:00 p.m., Thursday, August 25, 2022, at GLENWOOD MORAVIAN COMMUNITY CHURCH, 725 Gilmore St. Madison, WI., with his nephew, Rev. Andrew Kilps, presiding. A visitation will be held at the same location at 12:30 p.m. before the service.