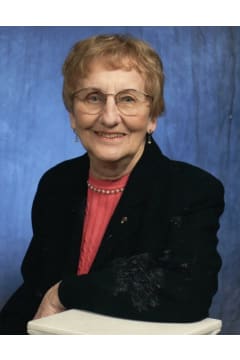 Mildred “Millie” Kennedy (98) passed away peacefully of natural causes at The Pines Assisted Living residence in Prairie du Sac, Wisconsin, on June 2, 2022.  She had lived there for about two and one-half years, but had spent most of her adult life in Madison. Mildred Magdalen Roelke (1923-2022), known to most as “Millie,” was the youngest child born to Amelia (Coenen) and Lawrence Roelke in Roxbury, Dane County, Wisconsin.

She had five older siblings: Elmer (Pat), Merlinda (Linda), Victor (Vic) Angeline (Angie) and Alfred (Fritz).  She was proud of her Prussian and Bavarian family heritage, and grew up in a mostly German-speaking household in an 1875 block-and-stack limestone house, which remains on the Wisconsin State Historic Register, on a 180-acre dairy farm on Highway 12 near Roxbury.  She referred to “home” as “a beautiful area with farming and woodlands.”  She said that she began to learn English when she entered the First Grade at St. Norbert’s Catholic School in Roxbury.  She later graduated from Sauk City High School, speaking excellent English and with elegant, cursive penmanship.

As a patriotic, recent High School graduate, she helped out during WWII by working in an office at the Badger Ordnance Munitions Works near Baraboo.  She then attended business school in Madison.  As she later related, “I met my future husband, John Kennedy, at a dance in Waunakee,” a man from a family dairy farm in Westport, whom she described as “my handsome Irishman.”  They married at Saint Norbert Catholic Church in Roxbury in 1946 and relocated to Madison.  “We had two children, Daniel John (1946) and Karen Mildred (1960).”

She worked in downtown Madison at the Ceramic Arts Studio when Daniel was a youngster and then began a career as a legal secretary for Rural Mutual Insurance Company.  After Karen was born in 1960, Millie went to work at General Casualty Insurance Company, until she retired in her 60s. During this time, she had a threatening medical diagnosis, but as of age 62, she was a breast cancer survivor and encouraged other women to have regular medical check-ups.

After she retired, she and husband “Jack” became frequent golfers, enjoyed many camping trips together, lively card games with family and friends, and vacation trips ranging from Door County to Ireland, Hawaii, Florida, Texas, Mexico and the Gulf Coast.  An avid gardener, newly retired, she began volunteer work at St. Mary’s Hospital in Madison, completing more than two decades of volunteer work there, until she reluctantly surrendered her driver’s license at age 92.  She said that during her years of volunteer work at St. Mary’s, she met interesting people, made new friends and “thoroughly enjoyed volunteering” there.  A family friend recently remarked, “I remember her working at St. Mary's to help others when she was in her 90s. Incredible.”

She was the bulwark of her family, a loyal wife and hard-working, good-humored and caring mother, especially admired by her children as she kept her family together during some difficult times, all the while a true multi-tasker as wife, mother, working woman and homemaker, in addition to her personal interests.  Mentally alert until the very end, her daily Brain Gym was the crossword puzzle in her morning newspaper.

“Jack” and Millie were charter, founding members of Saint Peter’s Roman Catholic Parish on North Sherman Avenue, where she did volunteer work in the parish office and was active in charity events and the Catholic Women’s Club.

During the winter holidays, when the family of four gathered together, son Daniel from New York City and daughter Karen from San Francisco, they drove to various Madison neighborhoods as volunteers delivering Christmas meals to seniors and shut-ins before enjoying their own family dinners at home.  This was a family tradition for many years.

Millie was preceded in death by her daughter, Karen, who was a 38-year-old attorney living in San Francisco where, as a pedestrian, she was struck and killed by a car in 1998, and her husband, John, a grieving father who died unexpectedly in a Madison hospital just 52 days later.

In 1999, Daniel and Millie traveled together to Austria for a holiday, which included cultural sight-seeing in Salzburg, Linz and Vienna, as well as a brief cross-border excursion to her ancestral “homeland,” Bavaria, in southern Germany, where some soil samples were discreetly taken and later added to the soil in Millie’s backyard perennial flower garden on Susan Lane in Madison.

A warm, compassionate and non-judgmental woman, Millie would ask when people were criticized socially as being different or eccentric, “Aren’t we all God’s children?  Didn’t God make us all?,” queries which halted more than one conversation…but always with warmth, respect and love.

Millie is survived by her son, Daniel, and his wife, Karin, whom Millie called “my other daughter.”  They reside in New York City and Vienna, Austria.  Millie asked that those who cared for her during her final years be publicly acknowledged.  They are Home Instead of Madison, for at-home care, The Pines Assisted Living residence in Prairie du Sac, and Agrace Hospice Care, all of whom are remembered by Millie and her family for their professionalism, compassion and loving care.

In lieu of flowers, Daniel and Karin express Millie’s wish that donations of any amount be made to the “Karen M. Kennedy Memorial Scholarship Fund,” which honors her late daughter, at Edgewood High School in Madison.

Millie’s life will be celebrated with a Mass of Christian Burial at 11:00 a.m. on Wednesday, June 8, 2022, at St Peter’s Catholic Church, 5001 North Sherman Avenue in Madison, with Father Jay Poster, Millie’s nephew, officiating.  Visitation (covid masks, please) at the church will be from 10:00 a.m. until 11:00 a.m., preceding the Mass. Burial will follow at St. Mary of the Lake Church cemetery in Westport, where she will be interred next to her husband and near her daughter.