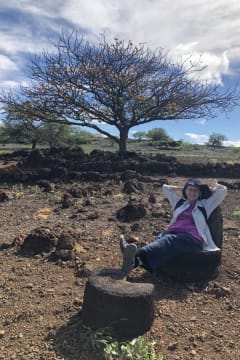 Ruth Ann Saunders, 76, died peacefully at home in Madison, WI, on September 26, 2022, having bid farewell to four generations of family and friends.

Ruthy was wonderful in conversation. She had a way of rephrasing things so that you saw in a new light whatever issue you were talking about; she'd bring you into new territory that opened up wild possibilities. She loved one-on-one discussions in which hashing out two contrasting points of view would lead to a third group of ideas. Co-creation was her key.

Ruth had a welcoming yet discerning eye for art, for people, for all living things. She understood the world to be full of wonder and took great joy in uncovering how complex the weave of reality proved to be. Her laughter was quick, her mind was quicker, and her pace as a hiker quickest of them all.

She was born in Burlington, WI, on November 7, 1945, to David and Emily Saunders. As a child, she lived in Dallas, TX; Madison, WI; and Whitewater, WI.

After obtaining an undergraduate degree in botany at the University of Wisconsin, she acquired a PhD in psychology, with particular attention to the ideas of Jean Piaget on childhood cognitive stages. While working in the university preschool lab, she wrote the books Piagetian Perspectives for Preschools: A Thinking Book for Teachers and Educating The Young Thinker: Classroom Strategies For Cognitive Growth.

Ruth then obtained a second PhD in philosophy, studying the nature of knowledge and belief. She taught for several years at Wayne State University in Detroit, and in Seattle. She retired from teaching in order to spend more time in Madison with Larry Levy, for 35 years her companion and husband.

After her long study of Western analytic philosophy, her philosophical interests expanded to include the study of Shamanism, alternative medicine, and the wisdom of indigenous peoples around the world. She joyously participated in shamanistic practices.

In her final days, she reported that she had journeyed to the day after her death. She found herself in a room where all communication was through music. One can imagine her there with songs such as “There’s a Long, Long Trail A-Winding” and “Red River Valley” — songs her parents also liked to sing, "Little Rabbit Foo Foo" for the kids, Civil War ditties or Scottish ballads like “The Gairdner Child,” “Malgre Tes Serments,” and other French-language songs, a Credence Clearwater Revival tune, Larry's 19th century classical music, and much more. We've lost our keeper of the family soundtrack.

Ruth is survived by her stepsons Andrew and Eric and their marvelous families as well as by her siblings David, Emily Nguyen, Daniel, and Joseph. She was a beloved aunt to Peter, Elisabeth, Rebecca, Hoai, Nam, Phong, Trevor, Duncan, Harrison, and Desmond and beloved great aunt to their many children.

A natural burial will be held 3pm Wednesday, September 28, at the Natural Path Sanctuary of the Farley Center for Peace, Justice, and Sustainability, 2299 Spring Rose Rd, Verona, WI 53593. In Spring 2023 there will be a Celebration of Ruth's life.